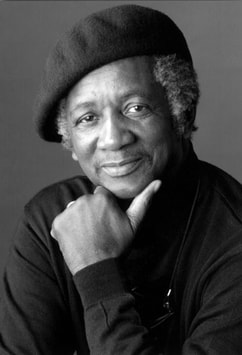 Jim Alexander has captured an expansive range of Black music in the US in his impressive photography collection of Black musicians in  Gospel, Blues, Jazz, Rhythm & Blues, and Hip Hop. His love for Black culture is clearly exhibited in these photographs which share the creative genius in each of these genres. Black music is anchored in the centuries old rhythms and musicality of African people. Alexander illustrates the enduring insistence on freedom and justice as an integral element of Black music from the beginning of our presence here in the western hemisphere. This music is an integral part of the landscape of Black life.
​
The first Africans transported to this country came from various ethnic groups with a long history of specific and accomplished musical traditions. Some brought musical instruments or built new ones. The banja or banshaw, now known as the banjo, was one of the African instruments that continued to be built and played here. Africans in America also fashioned numerous types of drums and percussion instruments from whatever materials they could gather. Slaveholders, however, eventually discovered that African slaves were using drums to communicate among themselves and by the 1700s, drums had been banned on many plantations. African American slaves on southern plantations cultivated their own musical styles, which later evolved into gospel, blues, and what is now known as bluegrass and country music. Spirituals are an oral tradition resulting from the mixture of African culture with Christianity on American plantations. 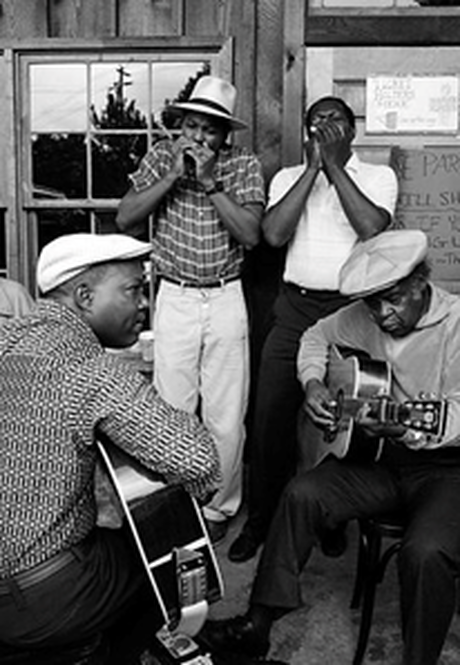 Pioneers of the blues included artists Robert Johnson, whose influence is heard in many of today’s legendary guitarists; and Bessie Smith, the Empress of the Blues, who boldly sang classic blues and established roots for the forthright expressions of womanhood in music.  Dubbed "the Queen of Chicago blues" (and sometimes just the blues in general), Koko Taylor helped keep the tradition of big-voiced, brassy female blues belters alive for the modern age., Taylor won more W.C. Handy Awards than any other female performer in history, establishing herself as the greatest female blues singer of   her time.  Bobby “Blue” Bland began his career in Memphis, Tennessee, with bluesman B.B. King and ballad singer Johnny Ace (all three were part of a loose assembly of musicians known as the Beale Streeters). Bland—who, in addition to R&B, was influenced by gospel . He became famous with early 1960s hits for Duke Records, including “Cry Cry Cry,” “I Pity the Fool,” “Turn on Your Love Light,” and “That’s the Way Love Is.” His 1974 song “Ain’t No Love in the Heart of the City”   was  reworked (“Heart of the City [Ain’t No Love]”) for rapper Jay-Z’s album The Blueprint (2001).
​ Bobby Blue Bland
Gospel music is illustrated and celebrated in Alexander’s photographs of singers and musicians. Gospel music is a sacred music genre that emerged in the 1920s out of a confluence of sacred hymns, spirituals, shouts, jubilee quartet songs, and black devotional songs with noticeable blues and jazz rhythmic and harmonic influences. It is often considered the sacred root of several American pop music genres. Thomas A. Dorsey (the “father of gospel music”) coined the term in Chicago in 1921.

Tramaine Hawkins is the reigning diva of gospel music whose career spans over five decades. Since beginning her career in 1966, Hawkins has won two Grammy Awards, two Doves, and 19 Stellar Awards.  Rev. Al Green’s faith led him to devote his life to the ministry and open Full Gospel Tabernacle on Dec. 18, 1976.His music career — both gospel and secular — has proceeded in fits and starts since then. Green has not been in the studio proper in the eight years since the release of 2008’sLay it Down, an album co-produced by the Roots’ Amir “Questlove” Thompson, which paired him with a generation of younger artists like John Legend and Anthony Hamilton.

Initially, gospel was met with resistance from many church leaders; however, other composers began to contribute to the style, and audiences continued to support this sonic mix of black sacred folk music traditions with urban styles of popular music. Like African American spirituals of the 19th century, the lyrical content of gospel music is central important, and it addresses the worldviews, theologies, culture, and experiences of African Americans. Song lyrical content can be devotional, testimonial, inspirational, social justice oriented, or evangelistic.

Jim Alexander’s passion for jazz singers and musicians is evident in his photographs. Jazz music played a crucial role in the Civil Rights Movement and was intrinsic to African American history. Jazz originated in the African-American communities of New Orleans, Louisiana in the late 19th and early 20th centuries with its roots in blues and ragtime. Since the 1920s Jazz Age, it has been recognized as a major form of musical expression in traditional music. Centuries later, when the Black political voice was being suppressed by government forces and others, jazz became an outlet.

Duke Ellington was the greatest jazz composer and bandleader of his time. One of the originators of big-band jazz, he led his band for more than 50 years and composed thousands of scores. In 1939, Billie Holiday’s rendition of Abel Meeropol’s poem, “Strange Fruit”, described the horrors of Jim Crow-era lynching. The song is often considered the first and most influential jazz protest song.. In the 1940s, when most women singers adorned big bands as stage attractions rather than legitimate members of jazz ensembles, Sarah  Vaughan, along with her predecessor Ella Fitzgerald, helped to elevate the vocalist’s role as equal to that of the jazz instrumentalist.

In the late 1950s, jazz musicians became outspoken activists and started creating the soundtrack for the Civil Rights Movement. Record labels and television networks attempted to silence these artists and occasionally succeeded. Jazz songwriters, like Nina Simone and Charles Mingus, were undeterred by the opposition, and used their lyrics to further the movement. Simone’s Four Women, for example, highlighted four specific stereotypes of Black women while Mississippi Goddamn responded to the 1963 murder of activist Medgar Evers. Similarly, Jazz instrumentalists, like Duke Ellington and John Coltrane, composed music invoking the emotions of the Black Freedom struggle. Ella Fitzgerald was one of many artists who posthumously honored Dr. King with her single “He Had A Dream”.

Alexander’s photographs display the intensity and drama of Rhythm and Blues. R & B was the soundtrack to an important time in America. The development of R&B traces back to African- Americans moving from the rural south to cities between 1916-1960. Black music started to reflect urban environments through amplified sounds, social concerns, and cultural pride expressed through music. It combined blues, jazz, boogie-woogie and gospel taking the form of fast paced dance music with highly energized guitar work appealing to young audiences across racial divides. R&B laid the foundation for rock ‘n’ roll.

The 1960s was a time of great turbulence and change. The Civil Rights Act and the Voting Rights Act were passed during the 1960s and there was an emphasized pride in Black heritage. With the assassination of Martin Luther King Jr, major uprisings, and the Vietnam War, music reflected the country’s anxiety around social and political issues that were raging across the nation. Soul combined elements of blues and gospel with a driving bass line and percussive energy. The undeniable Queen of Soul, Aretha Franklin,  inspired generations of singers who came after her. In addition to being one of the best-selling artists of all time, she was deeply involved in the Civil Rights Movement. The Jackson 5
The intensity of hip hop is clear in Alexander’s photographs. Early hip-hop music saw its roots in the 1970s in the New York City borough of the Bronx. It started as a collaboration  of Black, Latinx, and Caribbean American youth at block parties—community gatherings that featured DJs playing soul and funk music. It used turntables and mixing board sets. The new sound became known as rap and hip hop. Early rap was for the most part related to dancing and parties. As a new school of rappers like Run DMC and many others began to experiment with technology; introducing the use of drum machines, synthesizers and samplers.
Considered one of the pioneers of female rap MC Lyte first gained fame in the late 1980s, becoming the first solo female rapper to release a full album with 1988's critically acclaimed Lyte as a Rock.
​
By the mid-1980s, not unlike the original Blues born out of everyday struggle, many rappers were focusing on the harsh realities of life in the inner cities. Street or hip-hop fashion came out of this musical movement with brands from rapper-turned-designers like Sean John by Sean “P-Diddy” Combs in 1998.

​Black culture was being defined in modern-day history by actions that included the Parental Advisory Warning label implementation by the Recording Industry Association of America (RIAA) in 1985, the 1992 Los Angeles uprising, and 9/11–a date in American history that also marked the release date of Jay Z’s influential album, The Blueprint. DJ Jazzy Jeff & the Fresh Prince
Present day influences trace back not only to the 80s, 90s, and 2000s, but continue to draw from the early days of the Blues, Jazz and R&B as we hear in the music of Alicia Keys, Ludicrous, Usher, Michelle Monae many more.