Gillian woke up early on Sunday morning and went to the ﬁrst church service with her parents and brothers, not wanting to stay for Sunday school. She waited until it was nearly ten o’clock to call Tina. She knew that Tina hardly went to church, and so she would be home. Tina answered the phone.

“Tina Joanne Lee! What happened to you last night? We looked all over the place for you!” Gillian
demanded, almost angrily.

“I…I wasn’t feeling well, so I didn’t bother to go,” Tina answered. Her voice sounded strange. I shouldn’t have answered the phone, Tina thought belatedly. I don’t want to hear how great the Barbecue was and all that I missed, but worse, how am I going to talk to the girls after last night? she thought, miserably.

“You weren’t feeling well?” Gillian sounded confused. “But you were ﬁne on Friday, so what
happened to you?” she asked, not fully believing her.

“It’s true Gillian.” Tina sounded almost tearful. “I really don’t feel well…I…I don’t know what it is!”
She was sobbing now but trying not to.

Gillian became concerned. This was not at all like Tina. “Tina, what is it? Why you crying?” she
asked, her voice softer and more sympathetic, looking around to see if anyone was hearing this
uncommon conversation with her friend.

​“I don’t know, Gilli,” she said as she tried to stiﬂe the sobs. “Anyway, I have to go now.” Gillian could hear Tina’s father in the background. He sounded angry, or maybe concerned…she wasn’t sure. Tina’s father didn’t seem as caring as her own, and although Tina hardly spoke about it, she knew life was not a bed of roses since Tina’s mother had left for Canada. She couldn’t imagine being sick and not having her mother’s comfort.

“All right. I’ll call you later, OK?” she said reassuringly to her friend.

This was very puzzling, and Gillian had an unusual feeling—not quite fear but something close. She
called Natasha and then C. C. to see if they knew what was wrong with Tina. They were all very upset and worried because Tina hardly ever cried.

That Sunday, Gillian felt as if a dark cloud was hanging over her. She didn’t even feel much like
discussing the barbecue because of this mysterious illness Tina had. She began to imagine all sorts of dreadful things that could be wrong. Would she be able to come back to school? Was it catching? Would she have to go into hospital? Would she die?

C. C. said she thought Tina was just playing one of her tricks because she was not able to go to the
barbecue after all. That would be just like her. Natasha didn’t know what to think, and while images of hospital rooms, operations and bad endings plagued her, she hoped C.C. was right. But Gillian insisted she had heard Tina crying on the phone. The worst part about it was they didn’t know what to do, and so Gillian decided not to call Tina again later as she had promised. What would she say or ask Tina that she hadn’t already asked? If Tina is like me, she will tell us in her own time, Gillian thought…that’s what I would do because I’m one of the musketeers and we share everything…usually. But waiting and not knowing was very worrying.

Selection 2 from “Celebrating ME”

C C. was a bit shy about telling her mother about the talk with Mishka. They often had what she
called their “grown-up” conversations, but this was quite different. C. C.’s mother had planned a big
‘talk’ for C. C. and had bought several books and CD’s. C.C. teased her that she must have thought it
was going to be like one of the conferences she was always going to! The two of them nevertheless
spent some time going through all the books, with C. C. surprising her mother with her knowledge of
the various body parts and functions. She felt quite proud of herself, and happy that her mother was
proud of her as well.

Tina was a little timid about telling her father and even her mother when they spoke later that night.
But eventually she told them about the talk with Mishka and she felt better afterward. Tina’s father
was quite relieved that all the details had been explained to his daughter. He wanted to be there for her but just wasn’t used to discussing these things. They became a little closer and more comfortable talking together about the little everyday things and even the more personal ones. Her mother promised to drop Mishka an e-mail to thank her, and both her parents agreed on increasing her allowance so she could buy her own pads with Natasha.

Gillian went home feeling happy and told her mother about the evening with Mishka.

“Well,” said Mrs. Samuels, “I’m glad you learned about it from someone as sensible as Mishka.
Daddy and I knew Mishka’s and Natasha’s parents when they were alive, and I know they would be
very proud of that young woman!” She went into her bedroom and brought out two small booklets
and handed them to Gillian.

“I had these to give you when you started high school in September, but maybe they’ll help a little
now that you’ve had that talk with Mishka.”

Gillian took the books and then looked at her mother, a question on her face. She made one request: “Mummy, can we do something special when my period starts?” Her mother thought that was a wonderful idea.

“Mishka is quite right! It a special time and worthy of a celebration,” she said. Gillian was glad that
her mother also felt it was important.

“In fact…” Mrs. Samuels sounded mysterious, and Gillian listened carefully. “Why don’t we take
Tina out for a celebration? I can check with her father, but I’m sure he won’t mind. Isn’t her mother
coming down in a few weeks? We could do it then. What do you think?”

“Mummy, that’s a great idea! And we can wear our barbecue outﬁts and everything!” Gillian was so
excited. She headed straight for the telephone to call the other musketeers to start the planning.

A few weeks later, Mrs. Samuels, Mishka, Grandma Anderson, C. C.’s mother, Tina’s mother, and
the four musketeers went to The Red Lantern restaurant in St. Lawrence for Chinese food. They all enjoyed themselves, and each of them wore something special. Tina showed off a pretty pair of red earrings her father had given her especially for the occasion. She was back to her old self, in a jovial mood, trying to teach the others how to eat with chopsticks when their class teacher, Mrs. Robotham, passed their table. She greeted them all warmly, but the girls felt a little awkward.

“So,” Mrs. Robotham said in her best ‘teacher’s’ voice, acknowledging the girls’ mothers and
Grandma Anderson “is this a special occasion?”

They all exchanged looks, unsure of what to tell their teacher. Mrs. Samuels was just about to speak
when Tina suddenly took control of the situation.

“Well, Miss Robotham” she announced in her friendly voice and looking mischievously around at the surprised faces, “we’re… celebrating me!

“Well, um,” stuttered the bewildered Mrs. Robotham.“Congratulations!” She walked away, still not knowing what she had congratulated Tina for.

Mishka raised her glass in a toast, and the others followed, smiling knowingly as Mrs. Robotham left, totally confused.

“Ah!” said Tina, raising her glass with an air of pride and importance. “There’s nothing like being a woman!” They all joined her in the toast, laughing and nodding in agreement. 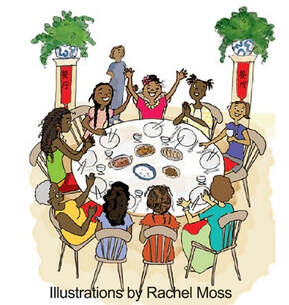